Due to its extraordinary energy density, Li-S battery is one of most promising next-generation energy storage technology. The cathode and anode materials in Li-S battery are sulfur and lithium respectively. During discharge/charge process, poly lithium sulfide can diffuse from cathode to anode which is leading the loss of active materials and the disability of anode. This is so-called “shuttle effect”. On the other hand, sluggish cathode kinetics also limited the performance. Recently, there have a burgeoning area which single atom catalyst was applied as cathode catalyst for Li-S battery. The preliminary tests indicated that great potential of single atom catalyst which significantly depress the “shuttle effect” and accelerate kinetics. However, the large diversity of single atom catalyst candidates exceeded the capabilities of conventional trial-error method or regular DFT calculations. Therefore, there is still absent an systematical study on the design principle of single atom catalyst for Li-S battery.

Recently, the research group leading by associated professor Bo Li from ShenYang National Laboratory for Materials Science, Institute of Metal Research performed an extensive screening of single-atom catalyst based on high-throughout calculations and machine learning method. Thousands of single transition metal catalysts supported on nitrogen doped graphene are screened to deliver a balanced optimal performance. The design principle are concluded from calculations. This work was published on Journal of Physical Chemistry letters (doi: 10.1021/acs.jpclett.1c00927) and selected as cover article. Meantime, this work is also separately introduced on Twitter by @ACS4Authors and @JPhysChem

In this study, over 800 adsorption configurations are obtained from DFT calculations. It is indicated that there are four different categories of adsorption. It can be further attributed as intact or dissociated adsorption. Based on crystal graph convolution neural network, all configurations are successfully classified as S-S bond breaking or others. Moreover, electronic structure analysis revealed that the interactions between poly-lithium sulfides are significantly enhanced when catalyst is present. Therefore, it reduced the possibilities of shuttle effects. The regression model derived from machine learning fit well of adsorption energy from DFT and MAE is within 0.14 eV. Based on this regression model, thousands of adsorption energies are obtained which yield a overpotential volcano plot. Based on screening, several promising single atom catalysts are proposed. The current work not only broaden the scope of single atom catalyst but also provide design principle of Li-S battery.

This work is supported by The National Natural Science Foundation of China and LiaoNing Province.

Figure 2. Performance of machine learning. a) classification b) regression。 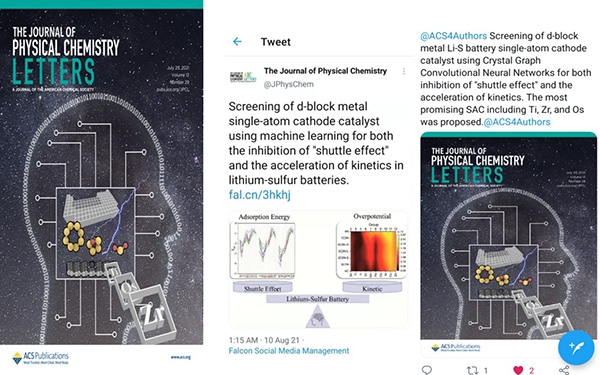