A fundamental understanding of the active sites in heterogeneous catalysts is extremely important in the development of effective catalysts. In general, it is difficult but important to identify the catalytically active sites due to their structural complexity, including the size and specific atomic configurations. Among all the catalytic configurations, single-atom catalysts (SACs) have been reported for many reactions to have high catalytic activity and selectivity, due to their maximized atomic utilization efficiency and isolated active sites. However, for some catalytic reactions, the isolated atomic active sites could lose reactivity due to the lack of coordination with adjacent active site. Whereas, fully exposed cluster catalysts (FECCs) can not only provide the catalytic sites with multiple metal atoms but also maintain a full atomic utilization efficiency. In all, it is extremely important to design and optimize active sites with maximum atom utilization and enhanced catalytic performance.

In this study, the team developed a series of Pt catalysts supported on the a nanodiamond/graphene (ND@G) hybrid support from single atoms, fully exposed clusters, and nanoparticles with different loadings of Pt (as in Fig.1) to reveal the special relationship between low-temperature CO oxidation activity and Pt-Pt coordination numbers and explored the local structure of active sites for low-temperature CO oxidation. The fully exposed Pt cluster (0.5 wt % Ptn/ND@G) on an inert nanocarbon support acted as an active species to show superior low-temperature CO oxidation activity and low activation barriers, which were attributed to nearly 100% Pt dispersion and the possession of multiple active sites (as shown in Fig. 2). Detailed experiments combined with DFT calculations revealed that a weaker CO adsorption, an enhanced O2 dissociative adsorption (than Pt nanoparticles), and more favorable neighboring sites for reactant adsorption (in comparison to Pt single atoms) on Pt fully exposed clusters resulted in the extremely high performance of CO oxidation at low temperature. 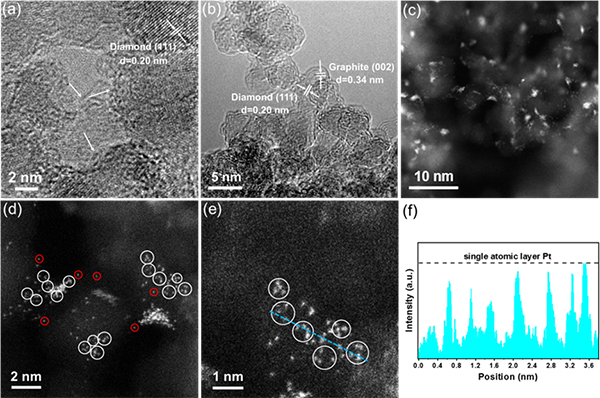 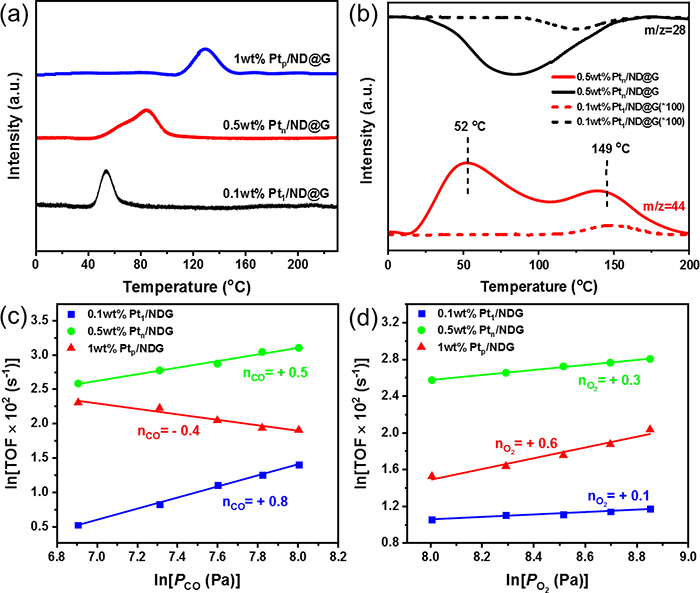