Unmasking chloride attack on the passive film of metals

The nanometer-thick passive films on metals impart remarkable resistance to general corrosion but are unfortunately susceptible to severe localized attack in certain aggressive media. The actual mechanisms of passive film formation, including the role of anions, especially chloride ions, in the catastrophic breakdown of passivity, have continued to intrigue the scientific and technological communities since such breakdown often leads to material failure, with pronounced adverse economic and safety consequences. Over the past decades of years, several classic theories have been proposed and accepted, many based on hypotheses and theoretical models, and oftentimes, neither sufficiently nor directly corroborated by experimental evidences. Undoubtedly, better understanding of these phenomena can be achieved via direct atomic-scale evidence of events across the entire film ranging from the surface to the metal/film interface. However, it is very difficult and challenging to obtain precise experimental information on chloride-induced structural alterations across an ultrathin passive film with a thickness of only a few nanometers and very low chloride concentrations. Here we show some compelling experimental results on the structure of the passive film formed on a FeCr15Ni15 single crystal in chloride-free and chloride-containing media.

Using spherical aberration-corrected transmission electron microscopy, in combination with computational modeling, we have compared the passive films formed in chloride-free and chloride containing electrolytes, and directly observed atomic scale accumulation of chloride ions at the metal/film interface, including the chloride-induced lattice expansion on the metal side, interfacial undulations and structural alterations to the film. We find that the passive film is mostly amorphous, with some nanocrystals (NCs). We directly visualize, from the in-plane and also the out-of-plane direction, the size, distribution, crystallographic orientation of NCs, and figure out the boundaries between NCs and the amorphous phase. Our experimental and computational results suggest that the interface between NCs and the amorphous zone assume a special kind of grain boundaries and thus provide ready paths for chloride ion transport. Our results show clearly that chloride ions actually permeate the outer and inner layers to attack the interface, rendering it indistinct and undulating.

This work unmasks, at the atomic-scale, the mechanism of chloride-induced passivity breakdown which is known to occur in a wide range of metals, engineering alloys, biomedical materials and instruments serving in wet environments. The present findings allow for the atomic-scale mechanism of passivity breakdown to be revisited on the basis of real space imaging in multi-dimensions.（Nature Communications 9, 2559 (2018)）（ Editor’s Choice：Science 361, 988 (2018)） 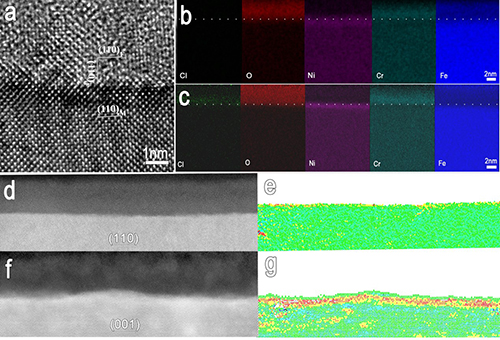 Fig.1：Chloride ions get to certain interfacial locations by heterogeneously penetrating the as-grown film, andmodify the interface zones via lattice expansion on the metal side, and induced undulations at the interface and structural inhomogeneity on the film side. (a)Cross-sectional HRTEM images along the [001] axis of the austenitic matrix showing the interface between the passive film and steel matrix. It is seen that the passive film is mainly amorphous, with some nanocrystals. (b-c) Element maps of the film formed in (b) 0.5 mol L-1H2SO4and (c) 0.5 mol L-1H2SO4+ 0.3 mol L-1NaCl electrolyte at 640 mV / SHE for 30 min. (d) High resolution HAADF-STEM image along the [001] direction of the austenitic matrix showing the passive film on (110) of FeCr15Ni15single crystal in 0.5 mol L-1H2SO4. The interface is sharp and straight at the atomic scale. (e) LADIA simulation map based on d, which shows no evidence of lattice expansion and associated tension. (f) High resolution HAADF-STEM image along the [110] axis showing a passive film formed in 0.5 mol L-1H2SO4+ 0.3 mol L-1NaCl electrolyte, with corresponding undulating interface. (g) LADIA simulating map based on f, revealing obvious lattice expansion, with associated induced tension.