The poor stability of nanograins in metals, characterized as a strong tendency to coarsen at much lower temperatures compared with their coarse grain counterpart, has become a major bottleneck restricting the preparation and application of nanograined metals. The traditional methods for stabilizing nanograins are mainly to reduce grain boundary energy or pin the grain boundary through alloying.

Systematic works on stability of nanograined metals has been conducted in Shenyang National Laboratory for Materials Science, Institute of Metal Research, Chinese Academy of Sciences. In 2018 (Science), researchers discovered the abnormal grain size dependence of thermal stability in nanograined pure copper and pure nickel produced from plastic deformation. As grain size is below a critical size, the dominated deformation mechanism of material changes from full dislocations activities to partial dislocations activities, leading to grain boundary relaxation, which promotes the thermal stability of nanograins. Subsequently, the grain size dependence of mechanical stability in nanograined metals were also revealed (Phys. Rev. Lett.), which is highlighted by Science entitled "A size limit for softening" (Science).

However, the grain size of pure metals prepared by severe plastic deformation (such as equal-channel angular pressing, etc.) is usually in submicron scale, and it is difficult to activate the grain boundary relaxation mechanism during processing.

In the work recently published in Science Advances, Prof. LI Xiuyan et. al. found that annealing twins can be introduced by a new appoach of rapid heating in nanograined copper, resulting in thermally-induced grain boundary relaxation and improving the thermal stability of the nanograins. Generally, the temperature for grain coarsening (~393 K) in unstable nanograins is usually lower than that for annealing twinning (473-523 K).

Based on the Kissinger effect, researchers proposed that the grain coarsening temperature can be promoted obviously by increasing heating rate, while the formation of annealing twins is little dependent on heating rate, which provides a potential to initiate annealing twinning before grain coarsening. In the experiment, the pure Cu with a grain size of about 80 nm was rapidly heated to 523 K at a rate of 160 K / min and then cooled. The grain size did not change significantly after heating, but the number of twins increased remarkably, leads to grain boundary relaxation. After rapid heating, the apparent grain coarsening temperature of grains increased from 393 K to above 773 K.

The approach of thermally-induced grain boundary relaxation can be used to improve the stability of submicron grains and nanograins produced from severe plastic deformation, which is of great significance for the development of highly stable nanomaterials and the promotion of nanomaterials applications. 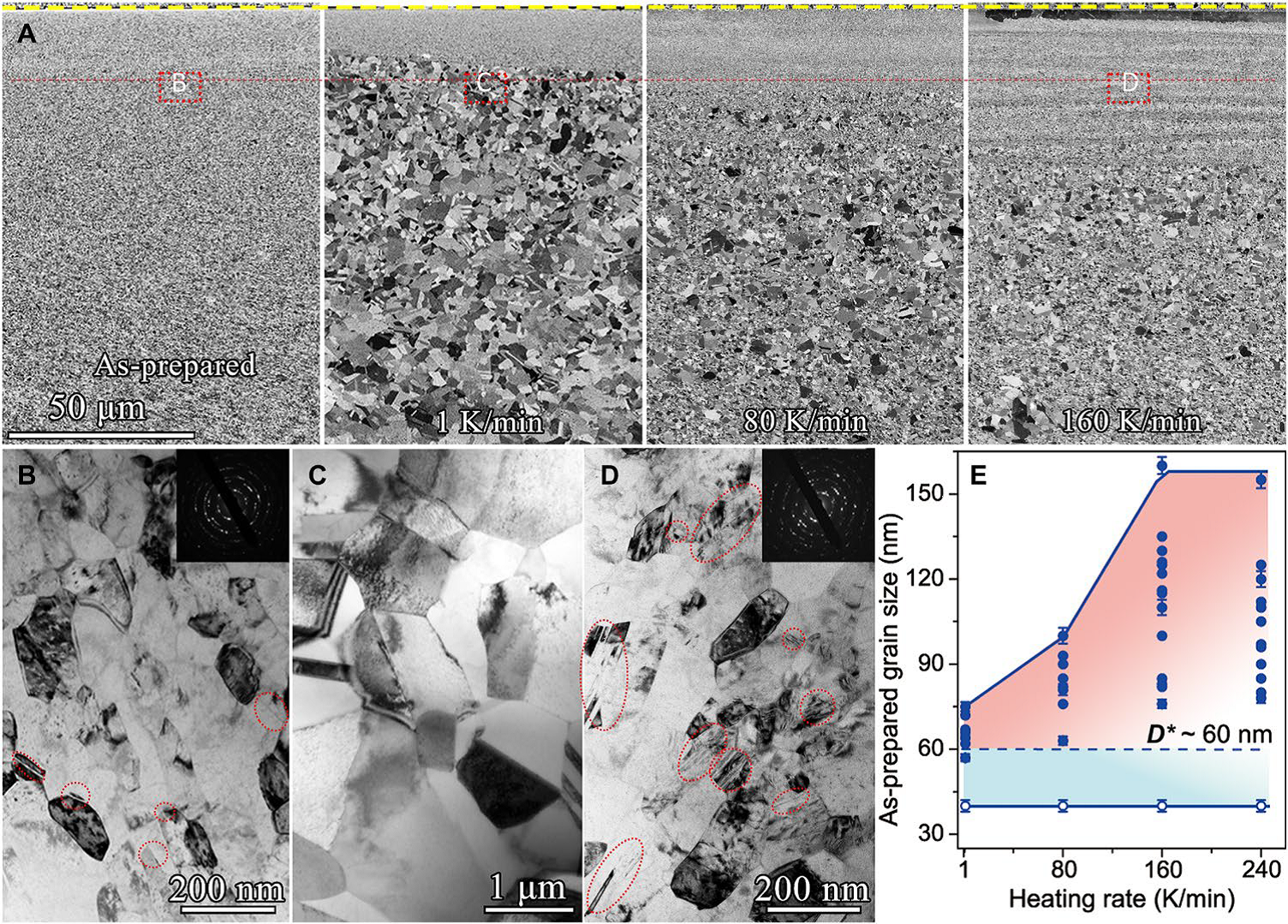 Fig. 1. Nanograins stabilized by rapidly heating in Cu. (A) Typical cross-sectional SEM images of the gradient nanograined surface layer in the as-prepared Cu sample and that heated to 523 K at different rates (1, 80, and 160 K/min, respectively). (B to D) Typical TEM bright-field images of the nanostructures at a depth of ~25 μm from the surface [as indicated in (A), with an average grain size about 80 nm in the as-prepared sample] in the as-prepared and the heated samples with different heating rates. Insets are corresponding selected area electron diffraction patterns.  (E)  The corresponding as-prepared grain size range in the stabilized surface layer of the gradient nanograined samples after heating to 523 K at different rates. Solid and hollow circles represent the upper and the lower limits of stable grain sizes observed, respectively. The dashed line represents the average grain size in the as-prepared sample (D* ~60 nm) upon annealing at 523 K from (10). Error bars are standard errors of the average grain size. 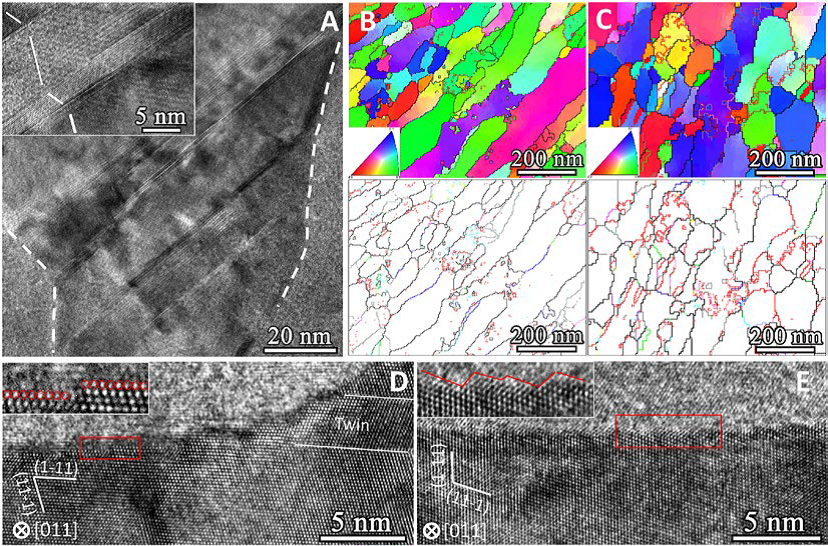 Fig. 2. Formation of copious nanotwins and faceted GBs in nanograins after rapid heating. (A) High-resolution TEM image of a typical nanograin in Fig. 1D with an atomic image of nanotwins in the nanograin (inset). (B and C) Typical distribution maps of the GB character of the as-prepared (B) and the rapidly heated [© at a rate of 160 K/min] samples. Colored lines stand for different boundaries including twin boundaries (red), low-angle GBs (gray), ordinary high-angle GBs (black), and other special boundaries (Σ < 29, other colors). (D and E) High-resolution TEM images of typical boundaries between nanograins in Fig. 1D; insets are magnified images of the red-outlined regions. 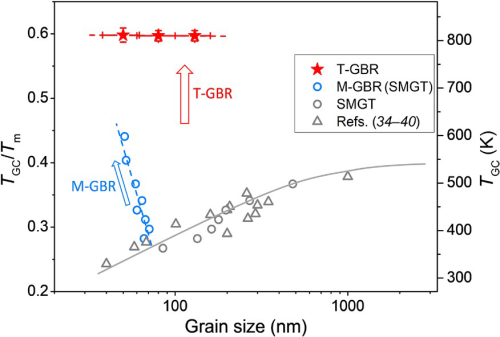