Refining grains of metals into the nanometer scale may greatly enhance their strength and hardness. But the introduced high density of grain boundaries provides a strong driving force for grain coarsening accompanied by property degradation. As grain size decreases into the nanoscale, grain coarsening occurs at much lower temperatures, as low as ambient temperatures for some metals. The inherent thermal instability is an í░Achillesí» heelí▒ of nanograined materials and hinders technological applications at elevated temperatures. The temperature response also complicates the processing of nanograined metals for further structure refinement and property enhancements.

We discovered that nanometer-sized grains in pure copper and nickel produced from plastic deformation at low temperatures exhibit notable thermal stability below a critical grain size. The instability temperature rises substantially at smaller grain sizes, and the nanograins remain stable even above the recrystallization temperatures of coarse grains. We processed coarse-grained oxygen-free Cu bar specimens with a purity of 99.97%by using a surface mechanical grinding treatment in liquid nitrogen to generate a gradient nanograined surface layer. After the treatment, randomly oriented grains with an average transversal size of ~40 í└ 2 nm were formed in the topmost surface layer. The transversal grain sizes increased gradually with increasing depth, to about 70 nm at a 20-mm depth and 200 nm at an ~150-mm depth. Deformed coarse-grained structures adherent on the deformation-free core in the depth span of 150 to 500 mm. We examined the grain size effects on thermal stability with observations of the gradient nano grained specimens annealed at various temperatures for 30 min. We found that for grain sizes above 70 nm, the coarsening temperature drops with decreasing size, in agreement with the reported trend for nano grained Cu processed from different plastic deformation routes. Grains below 70 nm exhibit distinct stability. Smaller nano grains become more stable, and their instability temperature rises up to 0.45 Tm, which is even higher than that of the recrystallization temperatures of coarse-grained Cu. The instability temperature for 40 nm grains in the topmost surface layer (623 K) is about 290 K higher than that for Cu grains with comparable sizes prepared from inert gas condensation (~333 K), which falls in line with the conventional trend. Similar trend was also found in nano grained Ni prepared by plastic deformation.

The inherent thermal stability of nanograins originates from an autonomous grain boundary evolution to low-energy states due to activation of partial dislocations in plastic deformation. The specific GB excess energy determined by DSC is ~0.52 í└0.03 J/m2 for an average grain size of 125 nm. While, or an average grain size of 50 nm, the GB energy decrease to 0.23 to 0.27 J/m2. More twins and stacking faults were detected in the top surface layer than in deep layers. The discovery of the marked thermal stability of nanograins in Cu and Ni is important for understanding the nature of GBs at the nanoscale and their response to external thermal and mechanical stimuli. Stabilizing nanograins is also vital for developing stable nanostructured metals and alloys for high-temperature applications. SeeScience360 (2018) 526¿C530 for more details. 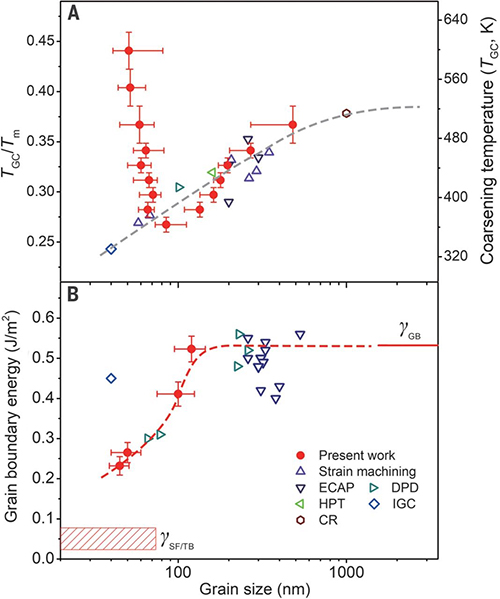