Strain-hardening (the increase of flow stress with plastic strain) is the most important phenomenon in the mechanical behaviour of engineering alloys because it ensures that flow is delocalized, enhances tensile ductility and inhibits catastrophic mechanical failure. Metallic glasses (MGs) can have high fracture toughness and have the highest known í«damage toleranceí» among all structural materials. However, the use of MGs in structural applications is largely limited by the fact that they show strain-softening instead of strain-hardening; this leads to extreme localization of plastic flow in shear bands, and is associated with early catastrophic failure in tension. Thus, obtaining a metallic glass that shows strain-hardening has been a Holy Grail in metallic-glass research.

Recently, Pan et al. found that deformation during triaxial compression could rejuvenate metallic glass samples enough to allow strain hardening in a way that had not been observed in a metallic state before. Within strain-hardening (a process of homogeneous flow), there would be no cause for shear-banding on the sample surfaces, totally different with traditional metallic glass deforming by shear-banding. As the plastic deformation continues, the hardness increases, accompanying with reduced exothermic heat of relaxation and densification, indicating that strain-hardening is closely related with structure relaxation. Simultaneously, the structural changes indicated by the position of the first halo q1, which shifts back towards higher q by deforming a rejuvenated sample, correlate well with the changes in the exothermic heat of relaxation and hardness, supporting the link between strain-hardening and structural relaxation. In addition, the initial rates of hardening are much higher than those of crystalline alloys, showing a very efficient hardening mechanism. However, the hardening capacity is soon exhausted. Pan et al. noted that the work-hardening of BMGs is based on reductions in energy, as opposed to the energy increases seen in crystalline metalsí¬a difference that highlights the novelty of the mechanism they used to strain-harden their metallic glass sample. 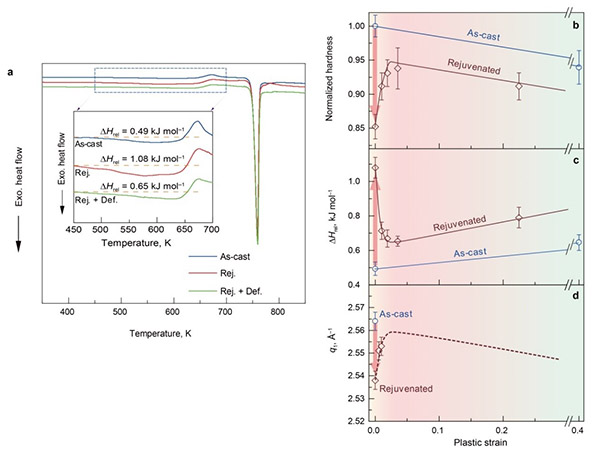 Fig.1. Strain hardening induced changes in the MG state.a, Differential scanning calorimetry traces measured on heating of Zr64.13Cu15.75Ni10.12Al10MG samples at 20 K min¿C1: as-cast (blue), rejuvenated (red), and rejuvenated and then deformed under uniaxial compression to selected strains (green). The inset shows a close-up of the relaxation exotherm and the glass transition. The dashed horizontal lines in the inset show the baseline with respect to which the heat of relaxation ªñHrelis measured. Normalized microhardness Hv/Hvas-cast(b), heat of relaxationªñHrel(c), and the position of the main diffraction haloq1of rejuvenated samples (diamonds) as a function of the compressive plastic strain applied.