Metals usually exist in the form of polycrystals with a large number of crystal interfaces. However, the stability of polycrystals is much lower than that of perfect crystals (single crystals) due to the relative high energy of disordered atomic arrangement in grain boundary region. Generally, the smaller the grain size, the worse the stability of the polycrystals. For some alloys with grain size small enough (a few nanometers), the entire crystallographic structure becomes unstable and prefer to form a metastable amorphous solid. Nevertheless, amorphous solids can only be formed in some alloy systems within special compositions. Therefore, there has been an important basic problem in the fields of materials science and condensed matter physics for a long time: are there any other metastable structures could be existed when the grain size of polycrystals decreases close to a certain limit value (such as atomic size)?

In this work, we found that a new type of metastable structure called Schwarz crystal appeared in pure Cu as the grain size reduced to a few nanometers. In the experiment, the grain size of pure Cu was successfully reduced to less than 10 nm by the use of a two-step cryogenic plastic deformation technology. The boundaries between such extremely fine grains were found to have the minimal interface characteristics, which is called Schwarz D-interface. And a large number of low-energy coherent twin boundaries embedded interior the extremely fine grains and connected with the original grain boundaries (Schwarz D-interface). Such polycrystal with Schwarz D-interface constrained by three-dimensional twin boundary network is named as Schwarz crystal. And this kind of polycrystals exhibit extremely high thermal and mechanical stability.

The discovery of the Schwarz crystal structure has opened up a new space for exploring the basic characteristics and new properties of solid material structures, and also provided new opportunities and challenges for the research and development of high-stability metallic materials and manufacturing processes. This research was published inScience, 370 (2020) 831. 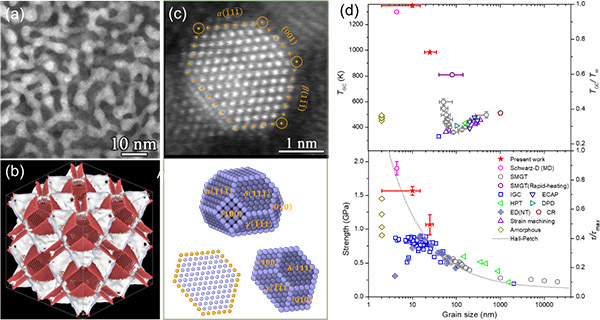